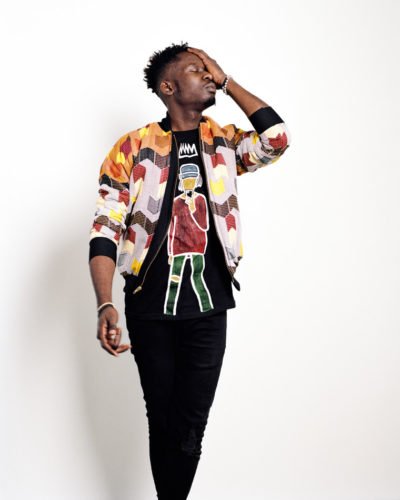 Mr Eazi has announced that his Canadian tour dates might be rescheduled as he’s having some sensitive issues with the US embassy as his international passport is not being released.
The singer posted the news on his Insta story yesterday, apologising to fans who have an understanding of the present predicament he’s being faced with from the US embassy. He also thanked them for keeping up with the story which has made them calm all the way.
Eazi revealed if his passport is not released, he won’t be able to travel out of the UK.
He however said if by close of business today, the issue still hasn’t been resolved, he will work with his team on how to make refunds to the fans who have bought ticket. He as well said he might have to cancel all his March tours in order to avoid future disappointments.
“I wanna thank all my fans for the support & understanding thus far, the update is that my passport is still at the US Embassy here in London and as such even tho i have my Canadian visa, i cannot travel to make it to my show in Canada as i cannot leave the UK without an international passport. My team will be providing details on rescheduling & refunds etc bless up. Also if by close of business tomorrow i have no word on my passport, i will be rescheduling all my March Tour Dates to avoid further disappointment, of my fans,” Mr Eazi wrote on his Insta story. 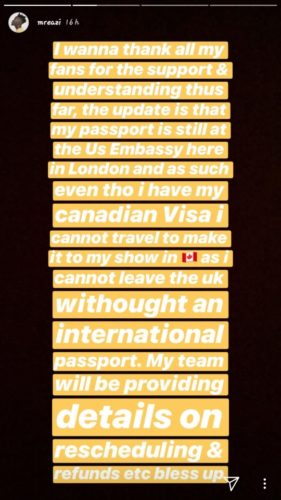 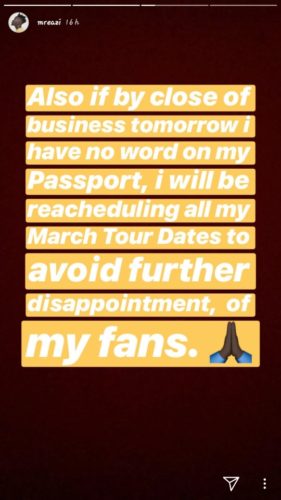