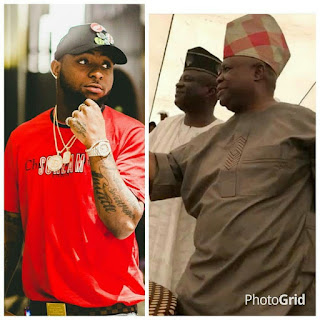 Davido’s uncle; Senator Ademola Adeleke, has been declared the new Governor of Osun State after a tribunal ruling in Abuja on the 22nd of March, 2019.
The DMW boss shared the news via his Instagram handle. The dancing senator, a representative of the People’s Democratic Party (PDP) was initially the winner of the election which took place in September, 2018. But due to the election constitution which states that if  the number difference between a winner of an election and the 1st runner-up is not up to the number of cancelled votes, there will be a re-run of the election.
Senator Ademola Adeleke won by just a slim margin Over Gbenga Oyetola the All Progressives Congress (APC). The PDP candidate won by just a few numbers which was not up to the number of cancelled votes resulting to him not declared the winner of the election as such creating an avenue for a re-run election.
In the re-run that was staged, APC candidate; Gbenga Oyetola was declared the winner, but the PDP felt there were some irregularities in the election giving them a tangible reason to challenge the result in court. The case has however been in court since last year until a ruling was announced in favour of the PDP candidate; Ademola Adeleke today.
Davido excitedly shared the news on his Instagram page just few minutes ago.