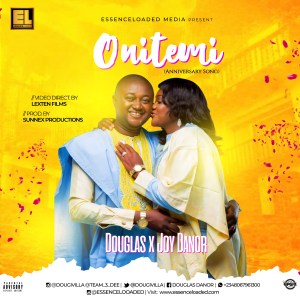 About the AuthorOnitemi was written and composed by Douglas E. Danor a gospel music minister, credited with the popular song *Imela*, amongst others. (Click here see Video of Imela).

It (Onitemi) was performed, in collaboration with his wife, Joy Danor, a Make Over Artist and Beautician, first at their 10th Wedding anniversary, then in this Performance Video, shot not long after, which was directed by the prolific Lexten Films Song was produced by Sunnex Productions.
Click to see sights and sounds of the Wedding Anniversary *here*
About the Song – Onitemi


The song Onitemi was composed and sang in commemoration/Celebration of 10 years wedding anniversary of Mr & Mrs Danor, Douglas and Joy  It was first performed live at the event on 21st of August, 2018.
Song, which was delivered mainly in English language in a duet-like fashion, with very little fission of the Yoruba language, centres  on appreciation of each other for “being there” this past decade. It also provided an avenue for renewal of marital commitments towards the future, which according to the couple is “forever”
Onitemi is dedicated to couples and families who have through the thick and thin stayed together for at least one year, despite the high rate of divorces around us. It is also dedicated to every single out there desirous of a union that will last a life-time.
Onitemi (Anniversary Song) by Douglas & Joy Danor