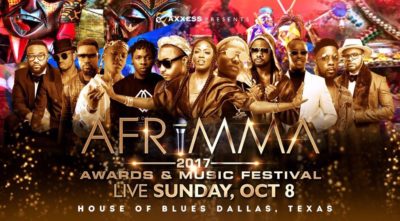 The 2017 edition of the prestigious Africa Muzik Magazine Awards & Music Festival (AFRIMMA) awards was held on Sunday, October 8th, 2017 at
the House of Blues, Dallas, US. The show was hosted by Basketmouth and Chipukeezy and the likes of Falz , Kaffy , Scientific from Liberia, Tzy Panshak from Cameroon, C4 Pedro, as well as Nsoki, both from Angola, entertained the audience with amazing performances.
The event was organized to appreciate the brilliance of African music and to reward the best music professionals across Africa. The different categories of the 2017 edition of the AFRIMMA
awards were very competitive but Davido ended up as the biggest winner of the night, claiming both the Artist of the Year award and the Song of
the Year Award for “ If .”
See the full list of AFRIMMA winners
below:

Artist of The Year – Davido (Nigeria)

Song of The Year – Davido – IF
(Nigeria)