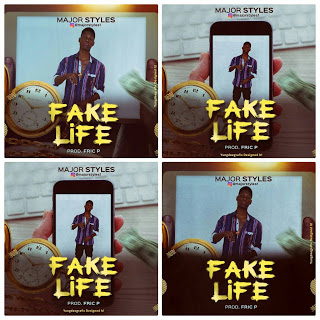 Major-styles previous single "Right from
Wrong"
Fast became a street anthem after the
release in 2016
(He is a fast rising Igbo rapper Osuji Ikenna
Chukwuemeka Prince)
His music is most appreciated for his deep
lyrics and passionate expression in the
delivery of his vocals. His fans adore him for
his captivating and intriguing stage
performances, especially when he does the
freestyle igbo rapping
Major-styles as he is fondly called, decided to
put up a very hilarious piece with very
commercial lyrics and a very danceable tune
to go with it.
Plus is a song that every Nigeria Dj, every
Nigerian citizen, every African and every
citizen of the world who appreciates African
music, should appreciate and dance to.
Fake life was produced by the very creative
producer FRIC P
It comes with a special flavour for your
personal enjoyment. ...Ensure you enjoy and
share....
SUPPORT GOOD MUSIC